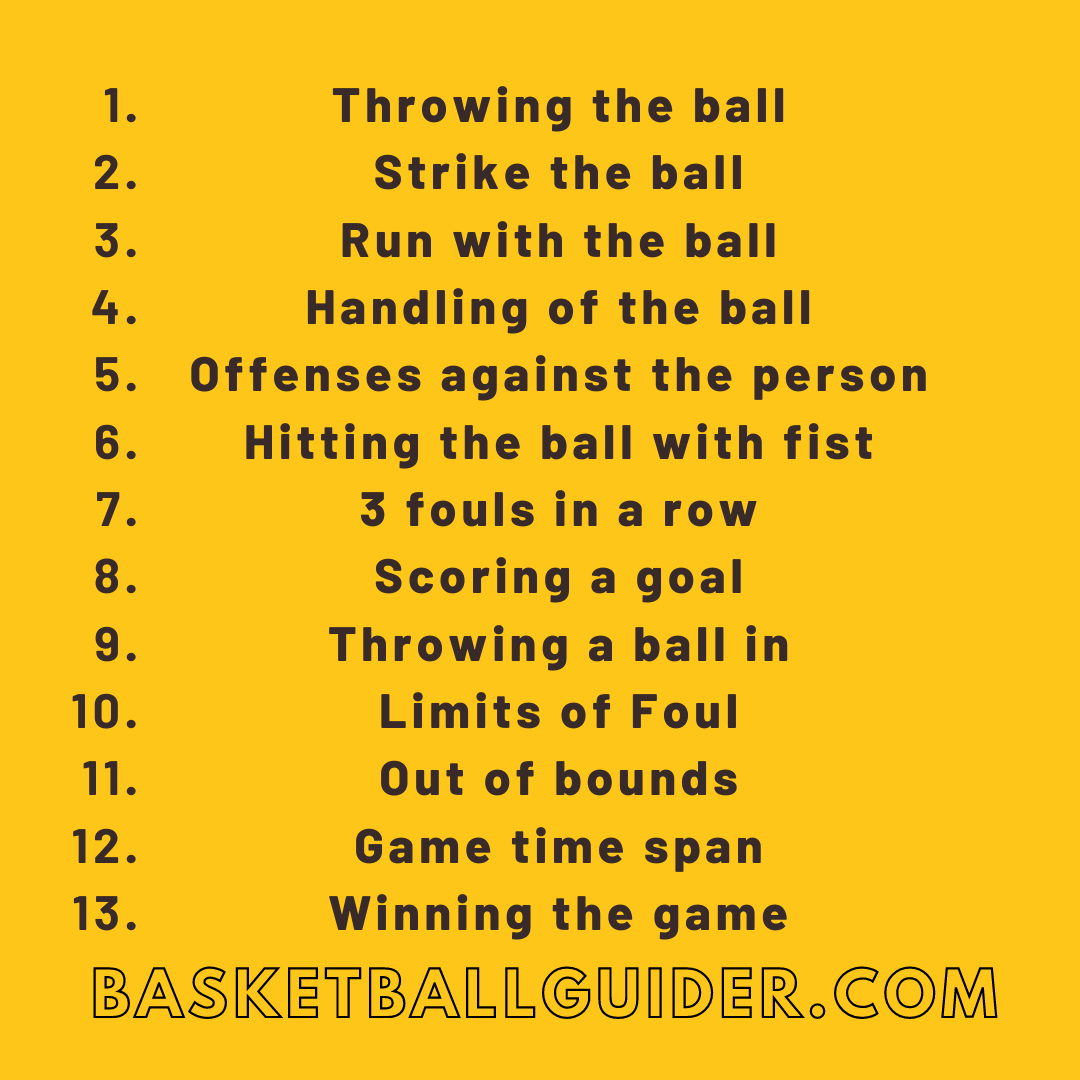 Basketball is the favorite team sport in which two teams of five participants each compete against each other. All participants are affected by the activity of playing this game and should work as one. The goal is to win as many points by hitting the ball through the ring. This game was invented by Dr. James Naismith, a Canadian PE teacher in Massachusetts who needed to invent a game that can be played indoors during winter.

There are 13 original rules that were developed and published by Dr. James Naismith to play basketball. After that, new rules were also introduced but these confirmed 13 official rules of basketball are still the core of the game.

The Thirteen Original Rules Published By James Naismith are stated as:

Players were allowed to throw a ball anywhere or in any direction by using one or both hands. They could either use one hand to throw or both hands at one time, there was no penalty in it. In this way, they were able to get easily closer to the basket without the process of dribbling. Dribbling means hitting the ball to the ground repeatedly by small kicks. Dribbling was not allowed in Dr. James Naismith but in today’s game, it is permitted.

On defense, Players were allowed to strike or hit the ball by using one or both hands in any direction. Hitting the ball with the fist and feet was not permitted.

Run with The Ball

Running with the ball was not allowed in this game. One had to pass the ball from the spot where he caught it. The player was allowed to take a few steps if he was running fast. Today’s basketball game still applies this rule.

Handling of The Ball

Players were not permitted to use their arms or any other body part except their hands to hold the ball. Only hands either one or both could be used to catch the ball. Still, there are no changes in this official basketball rule.

Offenses Against The Person

There are few actions you do so, will consider as foul. Hitting, forcing, thrusting, holding, and stumbling was strictly forbidden. If these 13 Basketball rules are breached for the first time, it will result in a foul call. The second foul will disqualify him until the next goal is scored. There will be no substitution allowed if one player had a clear intent to injure the other player for the whole game.

Hitting The Ball With Fist

Having your fist pressed against the ball is a foul, as are violations of Basketball Rules 3, 4, and 5.

Three Fouls In A Row

When the ball is passed or hit from the ground into the ring and remains there, a goal will be composed. If the ball rests on the edges, and the opponent moves the basket, it is considered a goal. Since basketball has evolved into goal tending and defense pass interference rules, including that defenders cannot touch the rim of the hoop once the ball has been shot, this rule is no longer applicable.

Throwing a Ball In

The person who touches the ball first must throw the ball back into play when it goes out of bounds. The umpire shall throw it straight into the field in case of a dispute. If the thrower holds it for longer than five seconds, it shall go to the opponent. The umpire will call fouls for prolonged delays.

Whenever three consecutive fouls are committed, the umpire should notify the referee. In accordance with Rule 5, he shall be able to disqualify men.

There will be two halftime periods of 15 minutes each, followed by a five-minute break.

It is decided who will win based on how many goals they score during that time. Besides keeping track of goals, he will do all other duties usually associated with a referee.

1. Who first invented the rules for a basketball game?

Dr. James Naismith, a Canadian PE teacher at Massachusetts needed to invent a game that can be played indoors during winter.

2. How many rules were made to play basketball games?

There are 13 original basketball rules introduced by Dr. James Naismith.

3. Is using fist to throw the ball allowed in basketball rules?

Using fists to pass the ball is not allowed described in rule 6.

4. What happens if a player does three fouls in a row?

Three consecutive violations by either team will count as a goal for the other team. Whenever three consecutive fouls are committed, the umpire should notify the referee. In accordance with Rule 5, he shall be able to disqualify men.